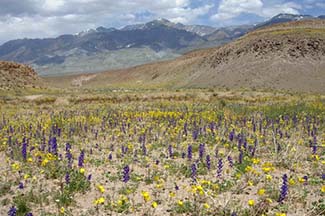 Vegetation of the Owens Valley has been studied, classified, and described in many ways.

Paiutes living in the valley when the first Europeans arrived were well-acquainted with the native flora and had developed extensive irrigation systems in several areas to propagate food plants (Lawton et al 1976).

Surveyor A.W. von Schmidt, one of the first Europeans to record observations, didn’t share the Paiutes’ appreciation of the native flora. In 1855 he wrote that “on a general average the country forming the Owens Valley is worthless to the White Man.”

On the other hand, only four years later (1859), Captain J.W. Davidson of the U.S. Army evaluated the valley quite differently: “Every step now taken shows you that nature has been lavish of her stores.  The Mountains are filled with timber, the valleys with water, and the meadows of luxuriant grass. Some of the meadows contain, at a moderate estimate, ten thousand acres every foot of which can be irrigated” (Sauder 1994).

Recent visitors from better-watered parts of the world have been known to dismiss the vegetation in the Owens Valley as “a bunch of weeds” while some long-time local residents still describe the Owens Valley’s extensive shrub lands simply as “sagebrush.”

Ecologists describe vegetation in terms of both physiographic features of the environment in which it occurs and particular associations of species.
Some characteristic types of Owens valley vegetation are listed below:

These occur in  areas of shallow groundwater on the valley floor. Two native grasses are characteristic of alkali meadows: Sporobolus airoides (sacaton) and Distichlis spicata (saltgrass). The meadows are home to several endangered species such as Calochortus excavatus (Inyo County star tulip) and Sidalcea covillei (Coville’s checkerbloom).  Alkali meadows themselves are classified as “very threatened” by the California Natural Diversity Database (Sawyer and Keeler-Wolf 1995).

These occur on the broad bajadas and alluvial fans which descend from canyon mouths of the Sierra Nevada and the White and Inyo Mountains. Common species include Atriplex confertifolia (shadscale), Ephedra nevadensis (Nevada ephedra), and Eriogonum fasciculatum (California buckwheat). At the northern end of the valley there are large stands of Coleogyne ramosissima (blackbrush) as well as such Great Basin species as Artemisia tridentata (sagebrush) and Purshia tridentata (bitterbrush).  In the southern half of the valley Mojave Desert species such as Larrea tridentata (creosote bush), and Ambrosia dumosa (burro bush) occur.

In arid environments water is often a limiting factor for plant growth. There are two basic strategies plant species have evolved for dealing with water stress:
1) drought tolerance
2) drought evasion

Drought tolerant plants have developed strategies to maximize their efficiency in use of water. This allows them to thrive in areas where moisture is not adequate for most species to survive at all. Alluvial fans and slopes of desert mountains are characteristic landforms for drought tolerant species. Some local examples are shadscale and creosote bush.

Drought evasive plants, on the other hand, have developed strategies to maximize growth in areas where a reliable supply of water is available. They out-compete drought tolerant species where water is abundant but don’t occur at all where it is not and so evade drought entirely. They typically occur along rivers and streams and in areas where groundwater is close to the surface.

Groundwater dependent vegetation (GDV) is the phrase used in the LTWA and its technical appendix (aka the Green Book) to describe vegetation composed of drought evasive species. Management of GDV is one of the primary concerns of the LTWA because GDV is vulnerable to water table drawdowns caused by groundwater pumping.

In Owens Valley, GDV originally covered large areas of the valley floor, as well as narrow strips along streams coming down from the Sierra and isolated patches surrounding springs. Much of the original acreage of meadow was cleared for agriculture and for construction of the towns.

For more information about vegetation of the Owens Valley floor, contact the Inyo County Water Department.  An overview of vegetation in the White and Inyo Mountains is available in Hall (1991).  Plant lists for certain parts of the Owens Valley such as the Alabama Hills and the Bishop Creek watershed are available from the Bristlecone Chapter of the California Native Plant Society