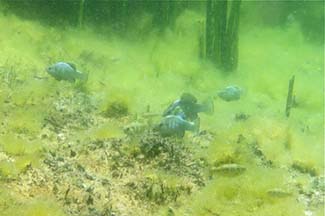 During the late Pleistocene (approximately 10,000 years ago), interconnected lakes and rivers covered much of the Great Basin. At the westernmost edge of the Great Basin, the Owens River filled the Owens Lake basin to a depth of approximately 250 feet and overflowed it, continuing as far south as China Lake. As these glacial waters receded, they stranded relict populations of fish in a few spring areas, the Owens River and some tributaries of the Owens River, and the Owens Lake, which had ceased to have an outlet. Not surprisingly–given a wide range of conditions and reproductive isolation for the fish–relatively rapid adaptive radiation and speciation ensued.

During the 1900s, the Los Angeles Department of Water and Power diverted the Owens River from the Owens Lake to its aqueduct, diverted Owens River tributaries, and began pumping massive amounts of groundwater, resulting in the drying of Owens Lake and the drying of many springs and seeps. Meanwhile, occupants of and visitors to the Owens Valley also introduced several species of fish as bait, for sport fishing, and for mosquito control. Consequently, at least three Owens Valley fish species came close to extinction before serious conservation efforts began.

Owens pupfish (Cyprinodon radiosus), for example, settled into the Owens River valley more than 2.5 million years ago and were abundant throughout the Owens River as recently as a century ago, but the species flirted with extinction several times during the last century thanks to surface water diversions, groundwater pumping, and introduction of non-native species such as largemouth bass and bullfrogs (Rana catesbeiana). At one low point in 1969, a Department of Fish and Game employee arrived at Fish Slough at the north end of Owens Valley in time to witness the only remaining pupfish population’s next-to-last gasp as water levels dropped precipitously. He relocated 800 pupfish–the founding population of all remaining Owens Valley pupfish today–in two buckets. Since then, small populations have been established in a few small refuges in the Owens Valley in areas supplied by spring flows or groundwater. Owens pupfish were listed as an endangered species by the federal government in 1967 and by California in 1971.

California and the federal government have also listed the Owens tui chub (subspecies Siphateles bicolor snyderi) as an endangered species; it exists only in a few fragmented habitats, including the Upper Owens River Gorge (below Long Valley Dam), the recently rewatered Lower Owens River Gorge (how the fish reestablished there has not yet been determined, but non-native brown trout in the area have nearly eliminated the population as well as potential genetic clues), and White Mountain Research Station (an introduced population established by individuals rescued from the Lower Gorge population). A new subspecies of tui chub, the toikona tui chub, was recently discovered at a ranch on the shore of the Owens (dry) Lake. Owens Valley tui chub behavior has not been extensively studied, although the fish appear to prefer dense vegetation for cover and habitats with low-velocity currents (such as pools or ponds).

and last, but not least,

Barlow, G.W. 1961. Social Behavior of the Desert Pupfish, Cyprinodon macularius, in the Field and in the Aquarium. American Midland Naturalist, v. 65(2): 339-359. (Although this paper does not address the Owens pupfish specifically, behavior of species within this genus are similar, and this good old-fashioned behavior study is almost–but not quite–as good as being there.)

Chen, Y., Parmenter, S. and May, B. 2007. Introgression between Lahontan and endangered Owens tui chubs, and apparent discovery of a new tui chub in the Owens Valley, California.Conservation Genetics, v. 8(1): 221-238.